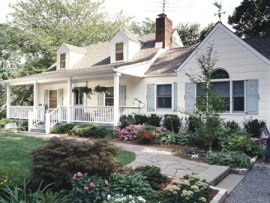 Cape Cods, commonly called Capes here in Fairfield County, CT go back to the 30’s.  They were originally designed as one story homes with four rooms on the main floor, a basement and an attic. Today the attics are used as bedrooms and many have been expanded with dormers and even turned into Colonials.

Capes are very popular in Fairfield County and are well suited for first time home buyers as well as those looking to downsize. Most often garages are detached but sometimes they are attached via a breezeway.   Depending upon their configuration, they can also be well suited to be a long-term family home.   The rooms in Capes can easily be opened up either front-to-back, both rooms in the front and in some cases all three rooms downstairs to make one big great room open to the Kitchen. When removing walls to open rooms, it is necessary to have appropriate reinforcements to support the structure and a licensed contractor should always be consulted and permits obtained from your town. As with the Cape above, these homes can be expanded to include front porches, dogwood dormers and other adornments, making it a great choice with a lot of opportunity to express your personal style.

The Colonial is the quintessential New England home featuring a combination of stately & often understated design. All are two stories and most often all of the living areas are on the main floor with all of the bedrooms on the 2nd floor.  With the increase of larger homes, you will see different styles and amenities, some with large 3rd floors, bonus rooms above garages on the 2nd floor and sometimes with a master on the 1st floor. Colonials often have spacious basements that can be converted into more living space,  fireplaces, good size windows, at least one half bath on the main floor and front doors with side lights. Garages can be attached or detached depending upon the vintage.  There are often a wide variety of expansion choices.  As long as the layout is suitable and construction complies with town zoning, Colonials can be one of the most flexible options for additions.  Generally speaking the Colonial is a safe choice as its layout is highly functional for a family and it is one of the most desired of styles in Fairfield County.

The Ranch style home is all on one level making it a popular choice for those looking to downsize.  Ranches are typically smaller homes but here in Fairfield County you can sometimes find expansive ranches with a good amount of square footage in million dollar + neighborhoods.  Since all of the living spaces are on one level, the basements are typically huge and when finished, ranches can offer a good amount of usable square footage.  Many of these homes were built mid-century and as such may not offer a lot of character while.  a good deal have been updated to today’s standards.  If you find a ranch that has not been updated but is the right size in  a neighborhood you love,  you can easily make it charming.  This can be accomplished by adding finishings such as crown molding, raised paneling, picture molding, paneled doors, etc. all of which will really jazz up your space and increase its value. In addition, ranches lend themselves to the easy addition of a second floor. Of course you have to make sure that the structure can handle it and all of this must be addressed with a licensed contractor in compliance with town code.  Generally speaking, ranches offer long-term potential and can be a good value

Error: Twitter did not respond. Please wait a few minutes and refresh this page.